How to find peace

Peace Symbol Tattoos for protesting Wars in the World

Many people are familiar with the peace sign and peace tattoos as one of the most visible icons of the 1970s, when protests against the Vietnam War were widespread and expressive. However, the humble peace symbol was born in 1958, a creation of the leader of a nuclear disarmament movement in London.

Peace sign tattoos come in a wide variety, sometimes incorporating other familiar symbols of faith and love, such as a heart, flowers or doves, and other times by themselves as a simple statement.

Best Place to show your emotion 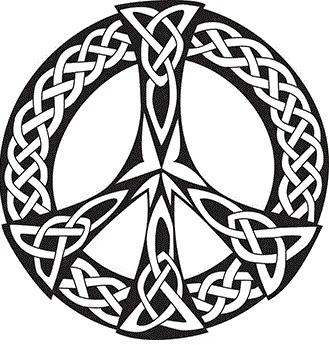 Where did the peace symbol take shape?

The peace symbol took its shape at the traffic light, a method of ship-to-ship communication using colored flags. Holding flags in certain positions indicates letters of the English alphabet.

Holding a flag in each inverted V-shaped hand communicates the letter N, while holding an upward flag and a downward flag indicates the letter D. Together, these letters mean "Nuclear Disarmament", and when the shapes overlap on one another they form the familiar form of the peace symbol. 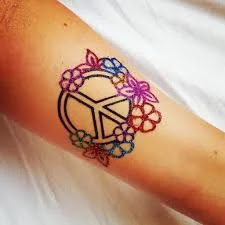 With the wars that continue abroad, pacifists and supporters of bringing our troops home can choose to have a peace tattoo placed in a visible place (such as an arm, wrist or shoulder) to express their yearning for peace. Those with friends or family who serve in the army will sometimes add personal details, such as identification badges, a yellow ribbon (another symbol that encourages the safe return of the troops) and the name of loved ones who have fallen or been injured In the battle.

Although the physical symbol itself was created to discourage nuclear war, the meaning behind the word and the concept of peace is obviously much broader. For those who are going through a transformation, a difficult time in their lives, or simply taking steps to be a better person, peace sign tattoos can be a reminder of their goals. The peace symbol tattoo combined with a dove or a heart worked on the image turns the anti-war symbol into something more personal.

The peace sign can be decorated with many different images to make your tattoo more personal. 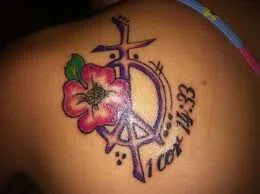 Some additions have included:

Incorporated in the familiar "arms" of the peace sign, these small ornaments can turn a universally known badge into something individualized. In general, additions are made to frame or highlight the peace symbol and not to hide it; Even surrounded by additional tattoo illustrations, a well-made peace symbol tattoo must be visible and prominent.

Unlike some tattoo designs that celebrate new fashions that may not last, the peace symbol has been popular for almost fifty years, loved by tattooed men and women from all walks of life. Simple enough to be drawn in any size, this sign can be easily recognized when drawing large or small. The basic form is easy to draw, which guarantees that even the most novice artists can apply it without any problem.

Peace symbols around the world